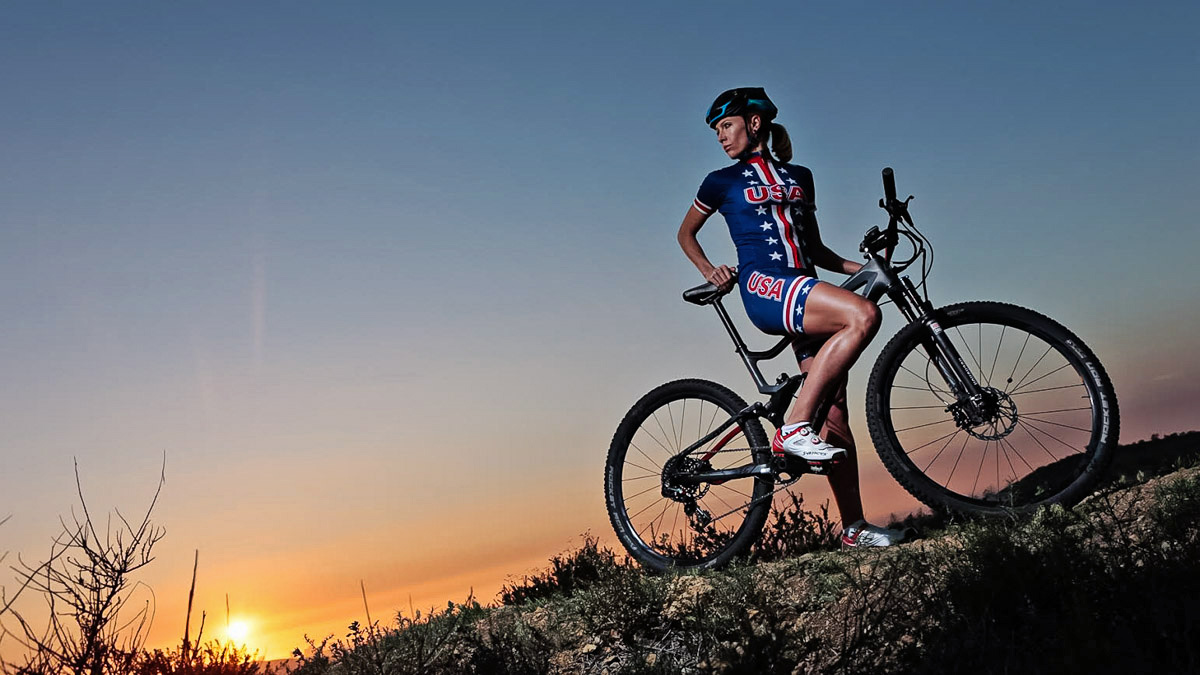 Dotsie Bausch credits her plant-based diet for helping her win an Olympic silver medal at 39 years old. Here’s her inspiring story — and how a dairy-free diet can help your performance.

I am an ordinary person. The wonderful and extraordinary events I have experienced in my life — earning an Olympic silver medal and leading a nonprofit I care deeply about — stemmed from the choices and actions of an ordinary life. I grew up in Kentucky with a fried chicken drumstick in each hand — it was my favorite food. I loved my horses, dogs, hamsters, rabbits, and fish but ate other animals, as many of us tend to do. We believe we need the meat or byproduct of certain species to maintain our health, enhance our performance, or sustain our children. During the vast majority of my professional cycling career, I believed this to be true, too.

Unlike most professional athletes, I didn’t find my sport until I was 26 years old. I had battled a severe eating disorder throughout my early 20s and hopping on a bike was the first thing I did when my therapist encouraged me to find movement again, in a healthy way, completely unmotivated by weight loss. When I started pedaling, I felt free. I began entering charity races — typically unequipped to handle the miles ahead of me — yet I kept up with the guys. Yes, I had natural talent, but I also discovered an unrelenting grit to keep pushing through the wind, up the inclines, and over unsteady terrain. I felt fueled by the power of curiosity. How far could I take this bike thing? I had no idea, but I knew I was going to hang around long enough to find out. I immediately got a job as a bike messenger in downtown Los Angeles, and I was the only female in a group of about 30 guys. They taught me how to jump curbs and ride with no hands, but my main goal was ‘getting miles in my legs’ which proved successful as I pedaled each day from Venice to downtown L.A. and back, logging over 70 miles per day. I eventually turned pro and spent 10 years on the U.S. National Team racing all over the globe.

Switching to a Plant-Based Diet

I decided to give up meat after watching videos one night about animal cruelty in the agricultural industry. As the weeks followed and I learned more about the unethical realities of dairying, I gave up dairy as well. I remember asking myself, “Why, as an adult, am I still drinking breast milk, anyway?” I have always been someone who likes to buck the status quo. The status quo to me is the cesspool of generalizations, fear, and mediocrity. So, when I began to ask questions about why athletes think they need meat or dairy to build strength, I found out quickly that all of their answers were the same — because everyone else does it. That answer was not good enough for me to continue to perpetuate the belief (which was once my own belief) that we need to eat animals or drink their milk to be strong and fast.

This new perspective came to me ten years into my professional cycling career, and at this point, I had my goals set on making the Olympic team for 2012. Several trainers and coaches cautioned against my choice to give up animal products — they insisted this diet change could slash my chances of making the Olympic team. Hello, status quo! None of them could ever give me an intelligent reason why they thought eating plants would ruin my chances of becoming an Olympian.

I continued training and I continued eating plants. What I actually experienced after going plant-based was nothing short of miraculous and a total game-changer (and a complete 180 of what was expected from my coaches). I felt more energy. My recovery time drastically decreased. I could train more often, at the same intensity. I kept pace and even edged ahead of my (much) younger teammates, and I made the U.S. Olympic track cycling team. We were going in as the underdogs in 2012 — the U.S. was thought to be fifth (at best) while the U.K. and Australia were expected to battle it out — and triumphed with a silver medal. I retired after those games, still the oldest athlete in history (male or female) to medal in my discipline. I was just shy of my 40th birthday. I hadn’t eaten any animal products in nearly three years.

It took a fantastic amount of training, grit, and persistence, but I also attribute my Olympic success to my dairy-free diet. I don’t believe I could have trained as hard or performed as well if not for it. Yes, my story is anecdotal, and my justification for ditching dairy is biased, but what isn’t biased is my performance. I’ve done the research and consulted with experts as to why my athleticism peaked after I gave up dairy and other animal foods. It’s not a mere coincidence.

How a Dairy-Free Diet Can Help Your Performance

I learned that dairy is a highly inflammatory food (1,2,3). Inflammation naturally occurs as the result of oxidative stress, which is a normal function that is part of the tear-and-repair model of building muscles. This temporary stress triggers the release of free radicals in the body, and these substances cause the muscles to swell and feel sore. The key to successful training is knowing how to reduce inflammation and oxidative stress as efficiently as possible. Because dairy has been shown to increase inflammatory and oxidative markers, it can slow this recovery process down (8). Dairy is heavily promoted at Olympic training centers, but knowing what I know now, I can’t understand why athletes would want to consume a substance that will add to the inflammation issue they’re trying to avoid. The only way to decrease inflammation and oxidative stress is to recover, and the more inflamed your body is, the more time you spend on the sidelines. Because I didn’t have to deal with excessive inflammation, I could spend more time training and improving. This gave me an edge, and it can work for anyone — not just Olympians.

My dairy-free diet also enhanced my performance in other ways. Plants contain an abundance of antioxidants — compounds that fight free radicals and reduce inflammation. Dairy, however, contains very few antioxidants (5). By flooding my diet with antioxidant-rich foods, I gave my body a jumpstart to combat inflammation and further reduce my recovery time. To put this into perspective, a whole-food, plant-based diet is sixty-four times more antioxidant-rich compared to a typical Western animal-based diet (5).

There are other performance inhibitors associated with dairy — increased mucus production that inhibits breathing, along with saturated and trans fats that can slow blood flow and therefore decrease maximum output. As an “older” athlete, the recovery benefits were astronomical for me (6,7).

It’s been almost nine years since the 2012 Olympics, but I haven’t crashed and burned like some athletes. I’m still extremely active and love to spend hours mountain biking. I attribute this to my love for the sport and the efficiency of my body, thanks to my dairy-free, plant-based diet.

I realize ditching dairy can seem like a significant change — perhaps even a gamble — but the research is solid. When you remove dairy and replace it with calorically equivalent plant-based fuel, you’re setting yourself up for enhanced performance and longevity in your sport. The nonprofit I started — Switch4Good — offers a multitude of resources for athletes who are interested in ditching dairy. Start with our Athlete Power Plate to learn how to build your meals to optimize performance. Alternatively, begin swapping out your dairy-based go-tos over time. One week, buy soy or pea milk instead of cow’s milk. The next week, opt for a plant-based protein powder in lieu of your whey-based formula. Eating dairy-free is not about deprivation — it’s about cutting out sub-optimal fuel in exchange for rocket fuel.

Any ordinary individual can do extraordinary things. It all comes down to the choices we make.

8. Khor A, Grant R, Tung C, Guest J, Pope B, Morris M, Bilgin A. Postprandial oxidative stress is increased after a phytonutrient-poor food but not after a kilojoule-matched phytonutrient-rich food. Nutr Res. 2014 May;34(5):391-400.

About Dotsie Bausch
Following a prolific professional cycling career that produced a silver medal at the 2012 London Olympic Games, eight US national championships, two Pan American gold medals, and a world record, Dotsie Bausch now leads Switch4Good, a nonprofit with a mission to educate professional and amateur athletes, along with the general public, about the health and performance benefits of a dairy-free, plant-based diet.