A look at Kate Courtney’s winning power file from the 2018 World Championships in Lenzerheide Switzerland. The young American credits pacing and a cool head for her incredible victory.

The 2018 world XCO Championships turned out to be an exciting and exhilarating race with first-year elite Kate Courtney taking a surprise win against a fast and experienced field. The youthful American proved she was the strongest mentally, and physically on the very technical and rooty course in Switzerland. 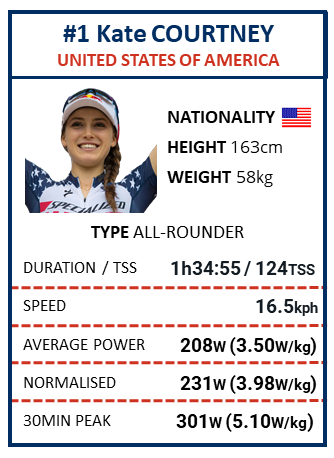 ed. note: Kate’s coach clarified after the race that her weight on race morning was actually 53 kilograms. All figures below have been updated to reflect this change.

The start of every cross country race is always the most intense, and this race was no different. With a 500m tarmac climb opening the first lap prior to a technical descent, it was crucial to get off the blocks as fast as possible.

In the opening climb, Kate hit her peak 10sec power in the first few meters off the line: 665W, 12.54 w/kg. This was immediately followed by the hard 500m climb, which she rode at a consistent 400W. This was a real top-heavy effort, but got her to the top of the first climb in 3rd place, keeping her out of any chaos at the back of the field.

For the remainder of the 1st lap (about 10 min) Kate averaged 193W, or 6.64W/kg. But we can see that she hit between 280-300W for 20-30sec at least nine times, mostly on the short rooty sections and punchy climbs. These short accelerations (around 5.4W/kg) would have allowed her to maintain a good line on the more technical, off-camber sections. And it paid off; she rolled into her second lap in second position, chasing only the fast-moving Annika Langvad.

In her post-race interviews, Kate said one of the main factors in her win was being able to keep calm and focus on pacing her efforts, to make sure each lap was executed in the best possible way. This is obvious when we see her effort from lap to lap.

The start lap is a slight outlier, being shorter than the rest, but we can see some very consistent power and effort through the remainder of the race. Note the big punch Kate had left in the tank on the last lap: her average power went up to 203w; 17w higher than her effort on the previous lap.

Looking at the above you can see why she was able to clinch the victory in that last lap. Her ability to stay calm and cool in the middle section of the race and maintain her position was crucial, allowing her to strike as Langvad deteriorated.

Kate’s only true prolonged efforts on the course came during the 500m climb which started each lap—but again we can see that her pacing here was perfect. When we look at the climb each lap (not including the first lap) we see that she held a very consistent 280W-300W (5.2-5.6W/kg), and that it took her between 2:07 and 2:14 to top out each lap. To deviate just 20 watts and seven seconds over seven laps (while riding in a podium position on a world stage) shows discipline well beyond Kate’s 22 years.

On the final lap, the distance was starting to close between Kate and Annika, with Kate taking the rooty sections more smoothly and powerfully than her counterpart. It was at these points that she gained much of her time. Her ability to avoid going too deep into the red over the duration of the race allowed her to concentrate on those critical technical sections. When Langvad finally bobbled, Kate took a decisive lead with just over 2km to go.

The American was able to power over the final kilometers with the force she had kept in reserve, allowing her to maximize her opponent’s every mistake. This victory really showed maturity above her age. It was a real nail-biting finish, and a great victory for a rider who will no doubt be a figure in XCO racing for many seasons to come.

This article was one of the most popular on TrainingPeaks in 2018. To see all the winners, visit the Athletes’ Choice 2018 Page.

About Stephen Gallagher
Dig Deep Coaching is a global coaching company that works with athletes of all levels across the following disciplines: road, track, cyclocross, MTB and triathlon. Whether you are taking part in your first ever gran fondo or aiming to compete in the professional peloton, Dig Deep Coaching can help you out. Get in touch via email or follow Dig Deep Coaching at Facebook Twitter and Instagram Sign up to our Mailing list and get 3 FREE crucial Sportive workouts and much more Training and Racing information. Register HERE
Visit Stephen Gallagher's Coach Profile
#CYCLING#DATA-ANALYSIS#MOUNTAIN-BIKE#PERFORMANCE