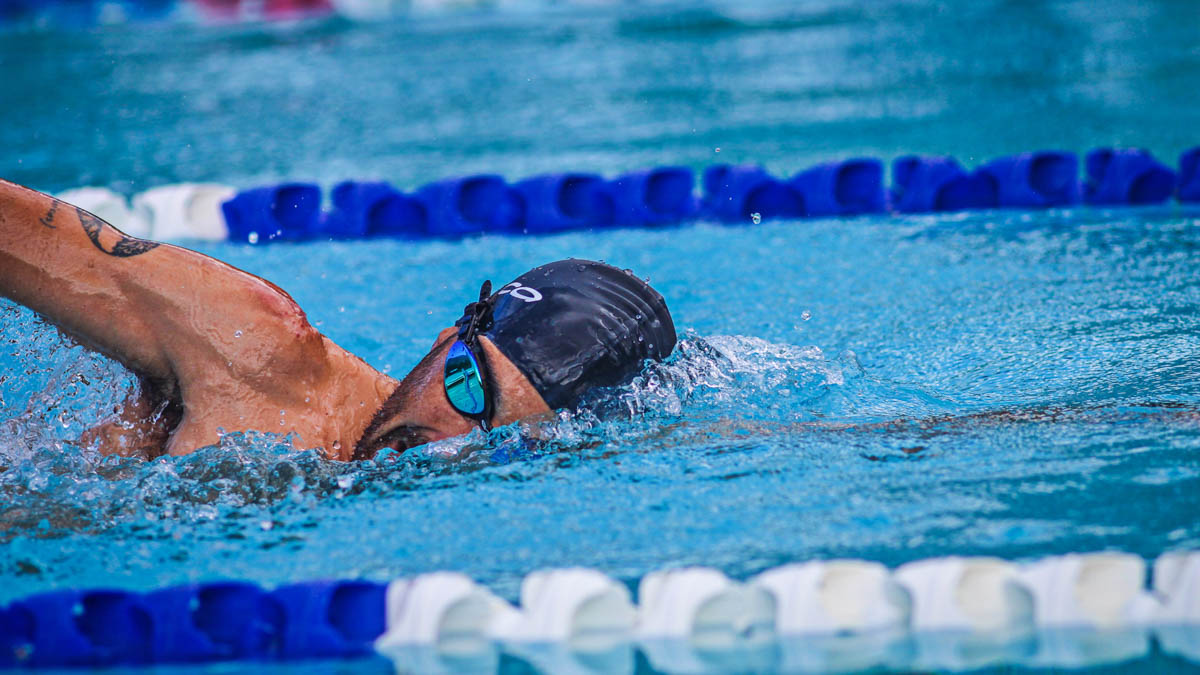 Improve Your Swimming with Better Breathing and Mobility

To swim efficiently, it all comes down to the basics. Coach Lawrence Herrera explains why proper breathing and good mobility are vital to your pool performance.

When it comes to swimming, we often focus on getting a more powerful start off the blocks, dialing in our turns, or isolating elements like the kick. But if you’re not breathing efficiently, you’re beginning from a deficit, and if you’re immobile in any area, you won’t have the opportunity to express your full potential in the pool or an open course. In this article, I’ll share some tips about how improving my breathing mechanics and mobility unblocked my swimming and can do the same for you.

The Root of My Swimming Problem

Here’s a quick confession: I never learned how to swim properly as a kid. When I went to the US Naval Academy after high school, I failed the 100-meter test in the pool. At this point I was more of a drowner than a swimmer, but with a lot of hard work I was able to make it through all my subsequent Navy testing and felt a lot more comfortable in the water.

A few years later, I fell in love with the Xterra triathlon series. I’ve always loved running, took quickly to mountain biking, and relished the challenge of competing in multiple disciplines. But while I was undoubtedly a better swimmer than I had been as a child and had acquired reasonable proficiency while serving in the military, I still needed lessons. Even then, my first off-road triathlon featured a water-based performance that didn’t exactly set the world on fire. It took me 33 minutes to navigate 800 meters of open water.

As it felt so unnatural to have my face in the water (the water temperature was 55℉ and I freaked out), I flipped over and backstroked the entire course. After the race, I was determined to improve and joined a masters group. Though this increased my total pool time, I didn’t get much coaching help to diagnose what I was doing wrong so I kept repeating the same breathing and movement errors.

Fast forward to the present day and I realized that I needed a big, ambitious goal to motivate me and focus my training. So here it is: I want to qualify for the World Championships in Hawaii. Like many age-group competitors, I’m pretty busy and training can’t be a full-time focus. In my case, I coach UFC fighters and other athletes by day and fit in running, biking, and swimming around this and my family commitments. Running has always come naturally to me and I’ve been working hard on my mountain biking the past few years. So what’s standing in my way of achieving my aim? Swimming.

Once I decided upon this target, I started looking at the times of my peers and realized that those who are at the level I want to reach are posting much faster swim splits. One day I was talking to a friend and fellow TrainingPeaks user about this and sought his advice. He told me he’d had a great experience with Cody at Front Pack Swim and had taken 10 minutes off his swimming time when he recently set a new half Ironman PR. So when I got home, I reached out to Cody to see if he could help me, too.

Cody asked me what I thought my main issue was and, without hesitation, I said, “My kick.” That’s pretty ironic for someone who coaches MMA fighters, but I’ve always thought this was my weak link in the pool. When I turn to the side I feel like my feet spread out too far and I assumed this was the root of my frustrations. However, once Cody had analyzed my video, he told me that this wasn’t the case. In fact, I was struggling to breathe adequately, which means I didn’t have a stable platform — and this manifested into tightness along the whole left side of my body.

He provided plenty of pool drills and exercises to fix the breathing issue and, as a result, address my movement dysfunction as well. But just as useful were the land-based exercises I started doing, too. One of these is a high band pull down (explained at the end of the article), which is designed to mirror a high elbow catch. In the water, I needed to reach and then pull down and back with my fingertips to create resistance and propel me across the pool. After his video assessment of my form, Cody pointed out that I was dropping my elbow and my wrist and fingers down (which he calls “petting the cat”), which reduces my pulling power.

It was tough to get pool time during the peak of the COVID-19 pandemic, but after 12 weeks of getting in the water at every opportunity and doing consistent work on dry land, I started noticing a real difference — not only in my times but in how much easier swimming felt overall. The biggest roadblock came around week eight when I overstretched my hips one night and could barely walk the next morning.

Fortunately, a physical therapist and orthopedic rehab doctor at my facility were able to help and prescribed me some mobility exercises. They realized that it wasn’t just my hips that were a trouble spot, but also noticed excessive stiffness in my lats, scalenes, traps, SCM, serratus and QL. Basically, my entire upper body was locked down. Part of the issue was that I was grooving a new, more efficient motor pattern but hadn’t done sufficient mobility work to help my body adjust. Because I wasn’t able to breathe properly in my left side, I created an overuse injury on my right side.

Once I was able to breathe on both sides in the pool and my muscles were unlocked thanks to a combination of manual therapy and daily mobility exercises (see the end of this post for some of these), my swimming really started to improve. It helped me to watch my daughter and her swim team when I took her to our local pool for training. The best swimmers breathed easily on both sides, while the rest struggled for air.

Another key to my progress has been keeping my hips flat in the water, rather than allowing them to excessively rotate like I was doing before. Some methods emphasize the latter, but it didn’t work for me. Getting on my side in an attempt to increase my reach merely exacerbated the technique errors that Cody diagnosed and made it even harder to breathe while maintaining a solid platform. Now that I’ve fixed that, my elbows are crossing the plane at the same time — one going forward as the other moves back — which has helped improve my stability.

Going back to breathing for a moment, Cody noted that I wasn’t emptying my lungs under water, which meant I was gasping for air on my next breath. He fixed this and taught me how to “breath in the window”, even on that troublesome left side. Before, I was spending too much time with my head out of the water, which meant my arm often ran into my chin. Now I’m taking in air in the pocket for my inhale and emptying my lungs on each exhale. Cody told me that I’m not alone in this regard. Most issues he sees in other swimmers come from poor breathing mechanics, over-rotation, or both.

As humans, the most fundamental thing we do is breathing. When we don’t, it causes us to tense up and fight for air, which means we’re burning more energy and moving less efficiently than we ought to be. So if, like me, you’re struggling to make progress with your swimming, I’d advise you to find a coach who understands the importance of breath and can tie this into improving your technique. It won’t just make you faster, but will also allow you to have more fun in the pool and in open water. Bring on Hawaii!

Here are some of the land-based exercises I used to improve my swimming performance, which I combined in a video. 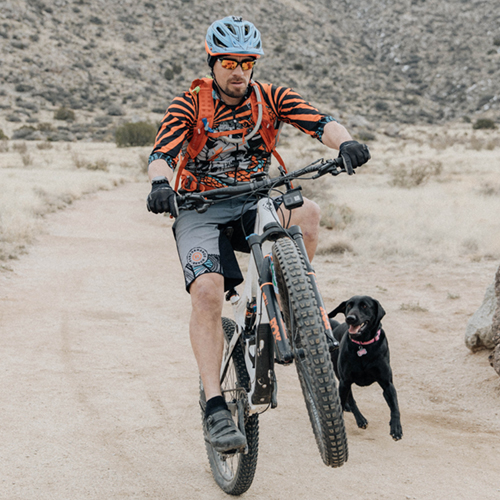 About Lawrence Herrera
Lawrence is a certified strength and conditioning specialist with the national strength and conditioning association (NSCA). He is also a USA Triathlon Level I coach. He is the state director for the NSCA, the worldwide authority on strength and conditioning. He has helped 1000s of recreational and professional athletes achieve their goals since 2003. He consulted for one of the largest sports and fitness companies in the world, Nike. Lawrence was nominated for the 2017 World MMA Awards Trainer of the Year. He holds a degree in exercise science from the University of New Mexico. He has done national presentations for the NSCA on training combat athletes in a group setting as well as strength training for endurance athletes. He has published several articles in peer-reviewed journals as well as being featured in Men’s Health magazine. Lawrence has also appeared on several UFC Countdown and Road to the Octagon shows. In his off time, Lawrence enjoys mountain biking with friends and family, the outdoors, and spending time with his 3 daughters and wife. Learn more at https://theperformanceranch.com/.