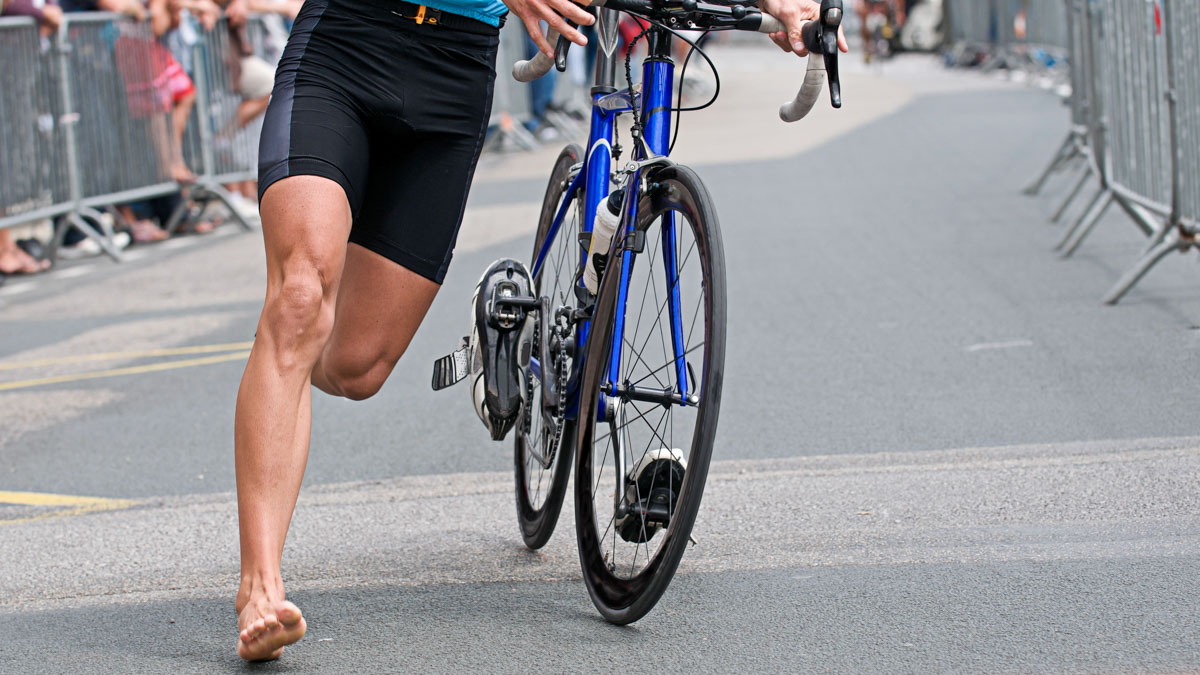 Easy Ways to Improve Your Transitions

Practicing your triathlon transitions can make all the difference come race day. Here are some easy ways to get faster at T1 and T2.

To take a wetsuit off in the shortest amount of time and then jump on a bike with your shoes already clipped in requires some practice. The same goes for T2, which is the transition from bike to run. That’s why it is paramount that you get used to the feeling of transitioning and practice the tricks that will help you make them smooth and fast. Here are some easy ways to implement transition-focused sessions in your training.

How to Improve Your T1

There aren’t many pools that will allow you to set up your bike and turbo poolside, so an alternative is to practice T1 after the swim section by “taking your wetsuit off as fast as possible” and “removing your hat and goggles in one motion,” says high-performing coach Jahn Hanson of Evolving Tri Training.

You can also practice this at home, Hanson says. After timing how long it takes for you to remove your wetsuit*, goggles, and hat, you can practice putting on your bike helmet, shoes, and number belt before mounting your bike on the turbo.

*Tip: Use a hose to make your suit wet so it’s easier to remove and slightly more realistic.

You can also practice T1 before your bike rides by getting your shoes on your bike and doing a training or flying mount more often.

How to Improve Your T2

Then there’s T2, where you should practice dismounting from your bike and beginning your run. This specific skill can be mastered within brick sessions, which are those that combine multiple bikes and runs. “Set up your trainers so that they’re ready when you get off your bike and change from cycling to running,” says Hanson.

Or, as Carl Botten of the Triathlon Academy recommends, you can also practice bike mounts and dismounts on a commute, if practical. Another option is to practice running with your bike as you hold onto the saddle (as you would in a triathlon) and then mount and dismount with a ride around the track in between.

“We have been known to use a cyclocross coach to practice mounts and dismounts,” says Botten. “Watch any cyclocross race and see how effortlessly they can jump on and off a bike.”

Why Efficient Transitions are So Important

Hanson notes that a lot of time can be lost if your transitions aren’t smooth. “A recent example of this was at the Leeds triathlon elite race. Lucy Charles-Barclay came out of the water in first place heading into T1. However, she left T1 in the second pack chasing the leaders, unable to make the time up throughout the race,” he says.

Efficient transitions become even more important if you’re competing in a shorter distance race, explains Botten. “A race can be lost with a poor transition as even a few seconds could be the difference at the end of a race.”

Botten explains that T1 in draft-legal racing is critical, as you need to get in the bike pack with everyone else. Otherwise, you risk a long and lonely ride to bridge the gap. Even with a 10-second disadvantage, the effort to catch up can put you in the red zone where you’ve inevitably used up too much energy.

No matter how you implement transition training into your routine, just make sure you spend some time focusing on them so you’re ready come race day. Whether you compete in short races or long-distance ones, mastering transitions is the key to a faster race — and a better ranking in the end.